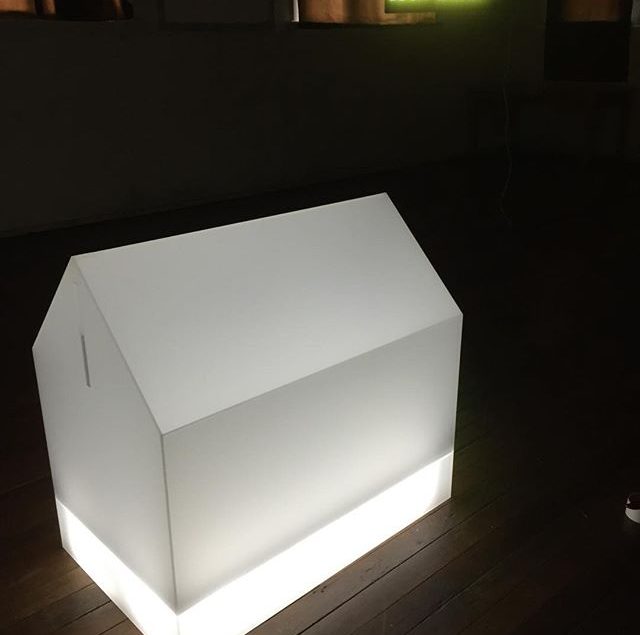 Hothouse brings the weather system from Mount Kinabalu, Borneo to nurture a rare and fragile orchid, the Paphiopedilum Rothschildianum, named for the family who owns the world’s banks (including the Reserve Bank of Australia). This work invites the audience to consider the relationship between weather and capital, at a time where weather still impacts the global futures market, and where we are witnessing unprecedented changes in the Earth’s weather patterns. The installation provides an opportunity for reflecting on what aspects of culture we choose to feed and grow, regardless of the cost to the existing ecosystems, and explores the irony inherent in our technological solutions to support colonised landscapes.

Paphiopedilum rothschildianum, commonly known as the Gold of Kinabalu orchid or Rothschild’s slipper orchid, was first published in 1887 by Jean Jules Linden. It was officially named after Baron Ferdinand de Rothschild (17 December 1839 – 17 December 1898) a French-born, Austrian turned British banker, art collector, and Member of British Parliament, from the prominent Rothschild family of bankers.

Paphiopedilum rothschildianum can only be found on Mount Kinabalu, on the island of Borneo (Kalimantan) in the state of Sabah, Malaysia, at an elevation of 600 to 1200 meters above sea level on northeast facing slopes. It commonly grows as a terrestrial in ultramafic soil but is also found growing as a lithophyte in leaf-litter on ultramafic cliffs, usually near a river.

Although this plant was introduced into cultivation in Europe and Britain in 1887, it was essentially a lost species for almost a century as no one could track down its indigenous location. The original site was deliberately falsified by the collector, Sander & Sons, who gave the location as New Guinea to mislead rival collectors (Koopowitz, 2001).

Rothschild’s Slipper Orchid was the most sought after orchid at the height of the 19th century orchid mania (Cribb, 1998). In the late 1950’s two populations were discovered at the base of Mt. Kinabalu, and in 1959 many of the plants in flower were collected to decorate a bower welcoming Prince Philip to Kota Kinabalu. Most rothschildianums in cultivation today, are descended from these specimens.

In 1979 a third population was discovered in Kinabalu park. These plants are threatened by shifting agriculture, logging, mining and commercial development. An attempt at propagation and reintroduction onto Kinabalu in the 1980’s ended catastrophically when the reintroduction site was burned.

Only one of the three sites remain on Kinabalu, an area of 4 square kilometres. Plants inside the park, although they are protected, are not safe from determined poachers. The population trend is decreasing and the number of mature individuals is very low and estimated to be less than 50. Paphiopedilum rothschildianum remains on top of the critically endangered orchid species list.